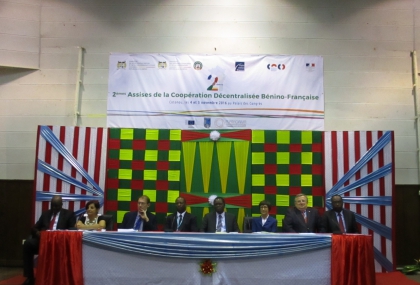 On the 4th and 5th of November about 300 representatives of local authorities, ministries, prefects, donors and civil society met in Cotonou for the 2nd Assises of Benin-French decentralized cooperation. Aim of this gathering was, six years after a first edition, to draw the state of actions, to share interesting new initiatives and draw new lines for the future. The 2nd Assises offered a stage to different organizations active in Benin and focused on the following topics: training, action plans for municipalities, climate adaptation, local economic development, inclusion of youth and gender issues.  The main objective was to exchange on these topics and on ongoing efforts and to look for possibilities to cooperate, find synergies and avoid overlap.

The meeting was co-organized by ANCB (the national association of Benin municipalities), the ministries for Decentralization and Foreign Affairs of Benin, Cités Unies France and the French Ministry of Foreign Affairs. It brought together 50 people from France and representatives from two Belgian municipalities. With 16 European local authorities represented, and active participation from the EU delegation in Benin and VNG International (the International cooperation agency of the Association of Netherlands Municipalities), it can be concluded that the Assises has ‘Europeanized’, as is envisaged in the activity plan of the strategic partnership of PLATFORMA. All participants expressed their satisfaction regarding the quality of the presentations and moderators. The path is now open for (joint) action in Benin!