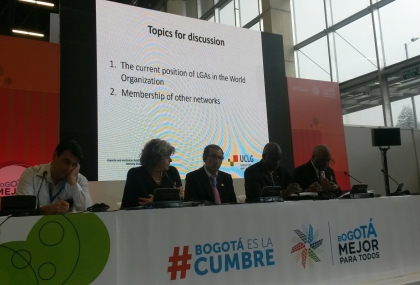 "Associations need to radically change if the context in which it operates is changing severely". This quote comes from Mrs. Jantine Kriens, the CEO of the Association of Netherlands Municipalities (VNG), and was underlined by several other CEOs and Presidents during the two community fora for local government associations (LGAs), organized by the CIB Working Group during the UCLG world congress in October in Bogotá.

Fora as a tool for future exchange

The CIB Working Group initiated to organize two sessions specifically aimed at LGAs, which have traditionally always been an important group of members for UCLG. The fora facilitated a first exchange between CEOs and Presidents of LGAs, serving as a starting point for further knowledge transfer and networking. Brock Carlton, CEO of the Federation of Canadian Municipalities (FCM), who also moderated the session with the Presidents, concluded that “even though the various associations and their contexts differ, the challenges and solutions are, to a large extent, similar” and that it would be very useful to remain in touch with some of the other CEOs. One of such challenges is how to continue to truly represent a diversity of members. The Association of Chilean Municipalities (AChM) tries to remain in touch and up to date through surveys conducted with members through an app, FCM organizes various fora – with the big city mayors; with the northern communities; with the rural communities etc. – and the Federation of Colombian Municipalities (FCM Colombia) exchanges primarily through its webpage, which facilitates permanent sharing of specific needs and knowledge.

Discussions on a plethora of topics

Both the session with the CEOs and the session with the Presidents were divided into two roundtables, to be able to offer the floor to 20 representatives from LGAs. The forum with CEOs focused on governance issues, related to the definition of priorities, lobbying at the national government and service delivery to members. In the panel discussions with the Presidents different trends and developments in the LGAs and their surroundings were discussed, including climate change, urbanization and migration, and how these developments effect the operations of the LGAs.

As part of the work plan for 2017, the CIB Working Group envisages to organize similar activities and dialogues for LGAs at the next world council and executive bureau meetings.