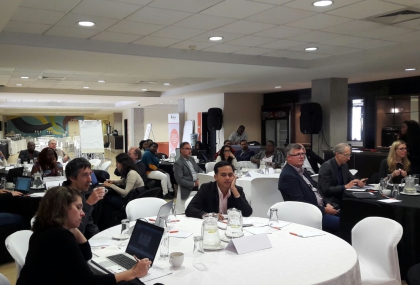 Lacking engagement of LRGs in consultation mechanisms and reporting

Recent reports from UCLG on the involvement of Local and Regional Governments (LRGs) in the voluntary national reviews on the SDGs and on the involvement of LRGs in consultation mechanisms about the SDGs show that engagement of LRGs can be greatly enhanced worldwide. In 2017, only 58% of the voluntary national reports mentioned that local governments had been consulted. Furthermore, only in 44% of the countries, subnational governments are involved in follow-up, consultation mechanisms. The SDGs form an opportunity to evolve the dialogue mechanisms between national and subnational governments.

At the meeting, the Federation of Canadian Municipalities (FCM) commited to working on this topic with their partners in Bolivia, Cambodia and Mali. In turn, VNG International will assist the LGAs in Benin and in the Palestinian Territories. In case that your LGA is interested in supporting another LGA, please check the list of reporting countries here and inform us about your plans by sending an email to uclg.cib@vng.nl