The City of Barcelona reinforces its support to the Middle East 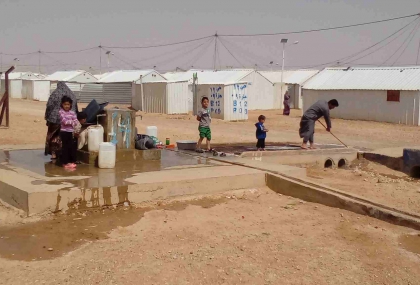 Cities and regions throughout the world are raising their stakes in humanitarian support, realising that foreign action is a responsibility of all levels of government. The City of Barcelona’s activities in Lebanon and Jordan are a good example of the power that resides in cities to reach out and support foreign cities and regions by sharing both resources and local expertise.

In Lebanon, the municipality of Barcelona is working along three lines of action. First is a set of activities in cooperation with the United Nations Development Programme (UNDP) and its Lebanese Host Community Support Project.  Within this framework, a Joint Catalan Cooperation Initiative is funding a Solid Waste Project in the Al-Fayha Urban Community (area of Tripoli). Second, Barcelona has aggregated a 120.000 € development fund. Third, Barcelona provides technical assistance for local authority’s capacity building, whose experts are working in coordination with UNDP, and the Lebanese technical teams in Al-Fayha.

In the city of Saida, the third largest city of Lebanon located in the Southern Governorate, Barcelona continues to support the process of rethinking and redesigning the urban seafront of the city. A Memorandum of Understanding (MoU) has been signed and new lines of common work have been declared for the next period, for example the creation of a Tourism Strategy for the city and the efficiency policies of water for municipal uses. All these activities directly link in with challenges faced by the city of Barcelona and thus make this a valuable learning experience for both parties. Lastly, Barcelona support Action Against Hunger, the Movement for Peace (MPDL) and the Foundation for Peace and Solidarity (Fundacio Pau i Solidaritat) and other humanitarian aid projects with a 156.000 € grant.

Recently, Barcelona has expanded its presence to Jordan where an extensive package of commitments proofs the city’s commitment to the region. Activities take shape in the form of a direct relationship with Greater Amman Municipality (GAM), the Spanish Cooperation and a direct funding of UN programs for refugees in the north. Through UNICEF, Barcelona has funded part of the WASH system in the Azraq Camp (60.000 €). Barcelona is affirming its long-term engagement in the region by renewing this agreement.

At the bilateral level, and in coordination with GAM and the Spanish Cooperation, Barcelona’s technical staff is involved in the design of the 2nd phase of the Urbanisation Pilot Project in the Jabal Al-Hussein neighbourhood of Amman. The experts will continue to be involved in the evaluation of the first phase of implementation. The City furthermore intends to sign a (MoU) between the GAM and Barcelona after the Jordan local elections that will be held in August this year.