CUF: Opening of a solidarity fund for Haiti: update on the situation August 2021 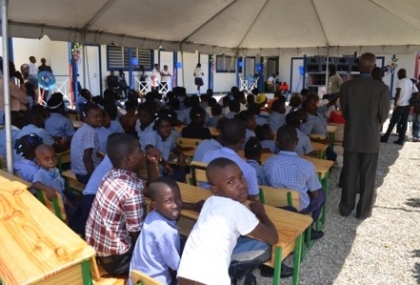 Cités Unies France, at the request of local authorities members of its network, is opening a solidarity fund in support of Haiti. This fund can be supplemented by the local authorities which wish it.
For more information on this, please get in touch with Simone Giovetti and Zoe Courboin.

Update on the situation

Haiti is once again going through a serious crisis that is primarily political, with violence in the streets, but also following the assassination of Jovenel Moïse, the president, on July 7.

Haiti is also going through a humanitarian crisis following the earthquake of August 14. This new earthquake claimed more than 2,000 victims and injured 12,000. According to Haitian civil protection more than 600,000 people are in need of emergency humanitarian aid.

This 7.2 magnitude earthquake on the Richter scale caused extensive damage in the south of the island in the Cayes region, but also in the capital Port-au-Prince.

The passage of Storm Grace, which struck two days after the earthquake, accentuated the landslides and the delivery of aid had to be interrupted during its passage.

As of August 20, the United States chartered 8 army helicopters to form an airlift and to come to the aid of the landlocked populations.

The work of NGOs is made difficult by the insecurity caused by armed gangs, and by the difficulty of accessing disaster areas.

France has relied on the army's system in the West Indies to come to the aid of Haiti. First, basic necessities were transported. Then, with the help of the Tulipe association (specializing in pharmaceutical equipment), the Crisis and Support Center of the Ministry for Europe and Foreign Affairs will be sent 30 boxes of emergency medicines (1.7 tonnes ) which will be given by the French Embassy to organizations in the health sector.

A meeting of the Haiti country group of Cités Unies France will be held shortly. If you would like more information on this subject, please contact Zoe Courboin, z.courboin@cites-unies-france.org