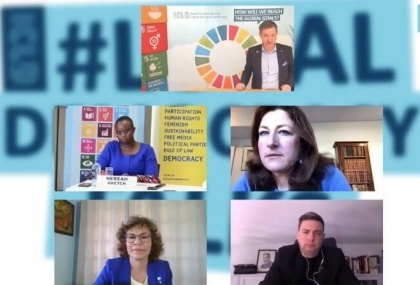 Key points from this panel that was held on March 3 2021:

Amelie Tarschys Ingre, Councilor and Chair of the Education Committee in Lidingö – Sweden

Jimmy Jansson, Mayor of the city of Eskilstuna, Sweden

On 3 March 2021 ICLD hosted its inaugural Local Democracy Talk on the topic of gender equality at the local level. The panelists – local politicians from Kenya and Sweden – spoke on the need for increased gender equality in cities and regions. Providing opening remarks, Swedish ambassador to Kenya, Caroline Vicini, highlighted he achievements of Kenya has made in this area, noting how much progress the country has made during the last ten years.

Speaking on the cooperation between Kenya and Sweden, Ambassador Vicini referred to the way in which both countries prioritize democracy, governance, and human rights.

The panel was attended by 75 participants online.

Gender equality is not only a fundamental human right, but an essential foundation for a peaceful, thriving, and sustainable world.1 The notion of a more gender equal world is a fight that exist in all corners of the world and the Local Democracy Talk was a successful attempt to bring people together from Kenya and Sweden to discuss how to move forward and how to promote a more gender equal society and world.

The message was clear: amongst the participants there was a form of consensus regarding the fact that gender equality is essential for our municipalities and regions to thrive.

Gender Equality in Kenya and Sweden

In Kenya, over the past decade, legislative and policy reform has established a foundation for gender equality across all sectors. However, despite the progress made, there are numerous challenges that is compounded by the intersections of poverty, age, and education disparities, which remain, with distinct regional differences.2 When looking at Sweden, gender equality is a principle in which everyone, regardless of gender, has the right to live without the fear of abuse or violence, to work and make a living for themselves. Moreover, gender equality is a fundamental aim of Swedish foreign policy, which Ambassador Vicini brought up, which wants to ensure that women and girls enjoy fundamental human rights and is incorporated in all international commitments and is fundamental when it comes to achieving Sweden’s broader foreign policy goals – peace, security and sustainable development.3

During the Local Democracy Talk that was held in Nairobi, Kenya on March 2, key policies and challenges were discussed amongst the participants. A key message was that: more men champions are needed to help champion gender issues. As brought up by multiple panelists,but highlighted by Hon. Adelina (governor of Makueni county), she stated that politics is about men and women. In Kenya, there is a lack of conceptual understanding that gender is not about women, equality is about men and women and their political will to change, she stated.

When it comes to policies with positive effect on gender equality in Makueni county, the gender mainstreaming policy is one of the most successful ones. However, amongst panelists from both Kenya and Sweden, there was a common understanding regarding gender-based violence and the importance of fighting that, both in Kenya and in Sweden.