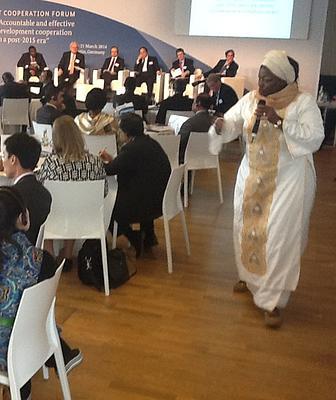 I think that it is crucial to take local priorities as the starting point for development co-operation.

Let me give you a very concrete example of why this is important. As mayor of Bagangté Municipality in Cameroon, I developed a project to provide drinking water to my citizens. With support from the International Association of Francophone Mayors, we built a well and held a large campaign to explain the need for citizens to pay taxes to ensure long-term sustainability of the drinking water system.

This was working well, and access to water was increasing. Then all of a sudden, our central government decided to launch a project in my region to provide free drinking water to citizens. This would cancel out all our efforts!I therefore told the government that we already had a programme to provide my people with water access and that this new project was unnecessary and potentially unsustainable in the long term. I am convinced that charging citizens for a service makes them take better care of the network, and ensures long term sustainability, as maintenance will be easier when people feel that the service belongs to them because they pay for it. I explained that if the central government wanted to invest in my community, their support for access to electricity would be far more useful.

Unfortunately, the Ministry refused to change or transform their project to improve the existing network.

This example is a typical one. In too many countries, local priorities are not taken into account, or not sufficiently known.

As a Champion on Development Co-operation for the global organisation ofUnited Cities and Local Governments, a function shared with eight other mayors from around the world, I aim to increase recognition of local governments’ role in development. I see it as my task to feed lessons from my local reality into international discussions on making development co-operation more effective, coherent and accountable.

Local governments are on the front line of dealing with development challenges, and identifying solutions to them. It is only natural that they take a leading role in the elaboration of development strategies for their areas. A formal consultation mechanism should ensure that these are included in national development strategies. What's more, local governments and their associations should be supported to have the capacity to engage in this dialogue.

Let me get back to my example from Cameroon. Our well project was supported by an association of local governments from abroad, with help from experts from other local governments that knew the kind of services we deliver and how to do this effectively. This helped to make the project a success. This “decentralised development co-operation” had a high degree of ownership and local traction, based on my local government’s priorities.

This kind of co-operation between peers is based on long-term relationships, resulting in trust, transparency and good dialogue between partners. This is very important to achieve sustainability. It can be done in a very cost-effective manner since the co-operation initiatives build on the existing local governments themselves and use existing staff within the municipal organisations. This avoids the need to set up parallel structures that could lack the political leadership of the partner itself.

The cost of not working with local goverments

Strengthening local governments is crucial to achieve development goals. A top down approach by central government can result in development policies ill-adapted to local needs and contexts. Development partners such as multilateral organisations, states, and civil society should understand that the cost of not working with local governments may be high, missing local ownership, as seen in the case of the water project in Bagangté.

For a start, their action might not be sustainable when not embedded into a local public policy designed to meet the needs of the citizen. Embedding development priorities in local public policy ensures their continuation and follow up because municipal policy is attached to a concrete workplan with a budget. This bottom up process is very important.

There may also be duplication of work at local and national levels, with a risk of confusion on the mandates of different levels of government. Bypassing local government may also generate distrust among citizens.

It is also important that reviews of development co-operation commitments such as the Busan commitments give more attention to the role of local governments in national debates on development priorities and implementation. It is good that UCLG is back on the Global Partnership for Effective Development Co-operation’s Steering Committee.

I think UCLG should also explore, within the Global Partnership, how the post-2015 development goals will be implemented. It is in this regard important that more focus is placed on who can help achieve which goals, as opposed to just focusing on what should be achieved.

I hope that together we can ensure that the level of government closest to citizens, becomes more equipped to address the upcoming new set of development goals, which should be in line with our own priorities at the local level.

The original blog post can be found on the website of the Global Partnership for Effective Development Cooperation.