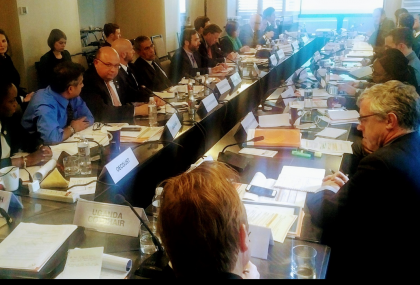 April saw the first Steering Committee of the Global Partnership for Effective Development Cooperation (GPEDC) since its successful High-Level Meeting which took place in Nairobi in November 2016. UCLG Champion for Development Cooperation Mr. Berry Vrbanovic, Mayor of Kitchener and UCLG Treasurer, represented UCLG at the meeting, chaired by the new co-chairs Germany, Bangladesh and Uganda.

Vrbanovic emphasised the important role of local and regional governments in the implementation (“localization”) of the 2030 Agenda for Sustainable Development and in the definition, implementation and monitoring of national development strategies. He underlined the need for continued visibility for the importance of local government capacity building and local government peer-to-peer development cooperation, to be able to truly meet the objectives of Agenda 2030. Finally, the Mayor of Kitchener called for strong involvement of local governments in the GPEDC’s core activities, such as its monitoring framework and its Global Partnership Initiatives.

The main topic of discussion was the GPEDC's work programme for 2017-2019. One of the pending issues remains the possible addition of a fourth, non-state co-chair to the chairmanship. UCLG finds this a suitable reform for a multi-stakeholder partnership such as the GPEDC and will continue to liaise about this issue with the other non-state constituences (civil society, trade unions, parliamentarians, foundations, private sector).

UCLG has a seat in the Steering Committee of the GPEDC since April 2014, with active participation of the UCLG Committee on Development Cooperation and City Diplomacy and the Capacity and Institution Building Working Group. Local governments are also working closely with CEMR, Platforma and the AIMF on this topic. The next Steering Committee meeting is scheduled for the end of this year.