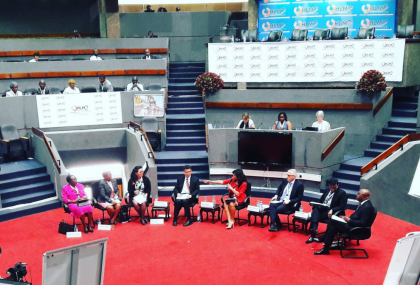 At the end of November, delegations from all around the world gathered in Nairobi for the second High Level Meeting (HLM-2) of the Global Partnership for Effective Development Cooperation (GPEDC). The adoption of the 2030 Agenda for Sustainable Development stood central in Nairobi, as it demands for a review and renewal of the development effectiveness agenda. UCLG was also present at this high profile event, to underline among other that the success of the Sustainable Development Gaoals depends on whether they will be carried out correctly, namely at the local level.

Mr. Boubacar Bah, Mayor of the 5th district of Bamako, Ms. Nonceba Molwele, Councillor of the city of Johannesburg and Vice-President of the Network for Locally Elected Women of Africa (REFELA) and Mr. Emmanuel Karuranga, Chairperson of the Kamonyi District Council in Rwanda and member of the executive board of the Rwandan Association of Local Government Authorities (RALGA), took on the role of UCLG Champions for Development Cooperation during the HLM-2. Messages from the UCLG policy paper on Development Cooperation and Local Government and from the new CIB policy brief on the involvement of Local Government Associations in the definition, implementation and monitoring of national development strategies, as well as experiences from the ground, were shared in panels during plenary sesions and in two side events, which were co-organized by UCLG.

For UCLG and it's CIB Working Group, a concrete achievement within GPEDC is that the outcome document of the HLM-2 clearly demonstrates further acknowledgement of the crucial role of local and regional governments in development cooperation, after several rounds of consultations to which UCLG and CIB contributed. Not only are local governments mentioned as one of the most relevant stakeholders throughout the entire document; specific reference is also made to the need to broaden the monitoring exercicse, to include local goverments and non-executive stakeholders. Also, the outcome document states "We acknowledge the essential role of transparent and accountable national parliaments and sub-national governments in achieving the 2030 agenda, as localizing the Agenda will guarantee that the needs of the communities are the drivers of cooperation. We commit to strengthen the capacity of sub-national and local governments to play this role".

During one of the side events, UCLG, UCLG Africa, CEMR-PLATFORMA, CGLF, AIMF and the European Union announced the renewal of the current "Global Partnership Initiative 14" on the role of local and regional governments in development effectiveness, under the new name: "Shaping national development agendas: the role of local and regional governments in effective development". Global Partnership Initiatives (GPIs) are voluntary initiatives aimed at concrete contribution to the implementation of the development effectiveness principles, carried out bij members of the GPEDC. In the next years, the different networks of local and regional governments will, together with the EU, work on better inclusion of local authorities in national dialogues on development cooperation, in line with the recently launched Territorial Approach on Local Development (TALD) of the EU and with the localizing agenda of UCLG and other networks. Activities remain to be outlined and more information will become available soon.