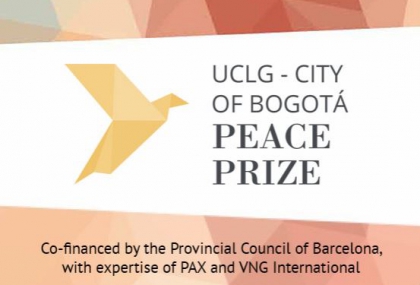 The high-level jury of the UCLG City of Bogotá Peace Prize has selected the five finalists for the prize. The Peace Prize is a triennial award for local governments that have implemented innovative initiatives in conflict prevention, conflict resolution or peace building, that have proven to have had a significant positive impact.

Out of many initiatives across the globe that had been submitted, the following innovative projects have been selected as top contenders for the award. The finalists comprise a diverse range of innovative peace projects by local governments. The local government in Canoas, Brazil, combines initiatives in technology, social inclusion and community policing to address causes of violence in target areas. Meanwhile in Colombia, the city government of Cali organises workshops for children and parents while training community mediators and social workers to promote peace in the community. In the same country, the municipality of Palmira hosts its Palmira, tu Voz es Paz urban music competition to raise young people’s awareness of the importance of living together peacefully. Located in a remote area of the eastern Democratic Republic of Congo, the local authority of Shabunda created Permanent Peace Committees to establish peace, restore government authority, reintegrate members of a local militia into the community and end the area’s isolation. In Kauswagan in the Philippines the municipality is active in the demobilization and reintegration of former rebel fighters, engaging them in organic farming.

These finalists are invited to present their case to the jury and public at the World Congress of the global organization of United Cities and Local Governments (UCLG), which will take place in Bogotá, Colombia, from 12 to 15 October 2016. The winner will be awarded a modest prize package, aimed at strengthening its peace projects and facilitating learning and exchange with other local governments that are facing similar challenges.

More information is available on the website of the award: http://www.peaceprize.uclg.org/