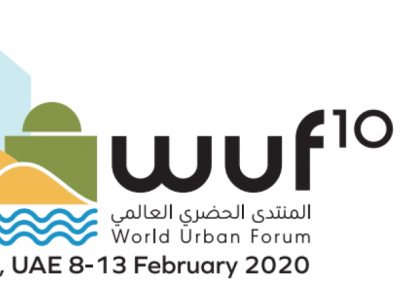 The tenth session of the World Urban Forum (WUF10), convened by UN-Habitat, was held in Abu Dhabi, United Arab Emirates, from the 8th to 13th of February 2020. It was the first time that an Arab country hosted the world’s foremost conference on cities and human settlements. It attracted over 13,000 attendees.

In more than 540 official events participants exchanged their knowledge on sustainable urban development in open and inclusive debates and sessions, through the exposition and discussion of best practices, as well as through the sharing of lessons learned. With regard to this year’s theme Cities of Opportunities: Connecting Culture and Innovation, dialogue sessions with different foci took stock of current and emerging approaches in linking culture and innovation as key drivers for inclusive, safe, resilient and sustainable urban areas.

The Abu Dhabi Declared Actions
The outcome, known as the Abu Dhabi Declared Actions, includes commitments from international organisations, national, local and regional governments, the private sector, civil society, academia and others for the next two years and beyond to support the achievement of the SDGs. Maimunah Mohd Sharif, UN-Habitat Executive Director, put the theme of WUF10 into context at the closing ceremony: "All three ingredients – culture, innovation and cities – are co-dependent and co-creating. Human settlements exist and excel on the dynamic mixture of cultures.".

UCLG organised sessions on the World Observatory on Subnational Government Finance and Investment (SNG WOFI), where it was made clear once again that decentralisation processes are pertinent to achieve the SDGs. During the UCLG session on the International Municipal Investment Fund (IMIF) David Jackson, Director of Local Development Finance, UNCDF, made the case for finance at the local level by stating „If you want to achieve the Paris Agreement, if you want to reach the 2030 Agenda, if you want to reach other global agendas – municipal finance has to be established“.

The diverse manner in which city level governments work on peacebuilding and conflict prevention was presented by the UCLG Peace Prize 2019 finalist, the Governorate of Duhok (Iraq). By bringing together all stakeholders, the authorities of Duhok were able to negotiate a deal in terms of managing the effects of mass forced displacement (Duhok’s population grew from 1,1 Mio. to 2 Mio. habitants), allowing for peaceful coexistence of all inhabitants. The initiative was presented by the International Committee of the Red Cross, Provincial Council of Barcelona and VNG International.

At the joined session of the Development Partners Network on Decentralisation and Local Governance (DeLoG) and the European Commission, DG DEVCO, If you want to go far, go with many: Strengthening the local voice at the international level, Sarah Bentz, Policy Officer on SDGs at PLATFORMA/CEMR, stated that “We have to unlock the potentials and magic of decentralised development cooperation between cities and regions.” Cities and municipalities are the major drivers in terms of the implementation of the SDGs. Policies at the local level have proven to show an immediate effect on reaching many of the SDGs. Both the 2030 Agenda and the New Urban Agenda underline the importance of networks and associations as dynamic actors of local action. The session made clear how networks and associations of local authorities help to give cities and municipalities a voice and support the implementation of the New Urban Agenda and the 2030 Agenda. Other actors, such as private enterprises or civil society organisations are entering the scene and helping to tackle these challenges as well, be it through dialogue or direct involvement. Challenges like rapid urbanisation, climate change and migration are addressed through collaboration and by unlocking the potential of decentralised development cooperation.

Last  but not least, ALGA and UCLG Africa organized an interesting session on creating an enabling environment and an African support system at local level, to protect and enhance heritage and culture. Please click on the link to find more information on this Session.