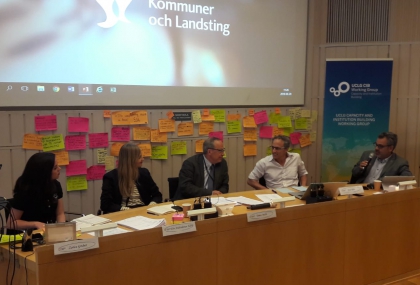 How can we measure our progress on the SDGs in a coherent manner? What are the do’s and don’ts when evaluating local government development cooperation programmes? How can we raise further awareness for Agenda 2030 and the New Urban Agenda among local and regional governments? These issues and many more were tackled at the 12th annual CIB meeting last week, which was held in Stockholm, at the premises of the Swedish Association of Local Authorities and Regions, with further support of SKL International and the Swedish International Centre for Local Democracy (ICLD).

Special attention for the SDGs

Based on the evaluation of last year, this year’s meeting included a full day on the Sustainable Development Goals. UCLG presented findings from its report which will be presented at the High Level Political Forum (HLPF) in New York in July. The report was based on 101 responses from 61 different countries; 28 of which are reporting to the 2018 HLPF. Local Government Associations (LGAs) played an important role in the reporting process: they were responsible for 54 of the responses. Since last year, the localization movement has spread to almost all the regions of the world. Despite these trends, outreach is still limited to a group of advanced cities and associations.

CIB members discussed how to prepare national delegations to the HLPF, how to assist partner LGAs in the implementation of and reporting on the SDGs in the next year and how to align the different systems to monitor the progress on the SDGs. Different members proposed to set-up a taskforce on SDG indicators in the next months; the CIB secretariat will discuss with UCLG how to follow up on this.

While many CIB members are occupied with the SDGs in one way or another, a range of other topics were also discussed in Stockholm. Monitoring, Evaluation and Learning remains a priority for all members. Expert Corina Dhaene shared findings on an analysis of 12 evaluation reports of CIB member organizations and advised on how to organize external evaluations effectively. The New Urban Agenda and sustainable urban development are also high on the agenda at many organizations, often combined with climate issues. In Canada and Flanders, national governments are placing more and more focus on gender in the local government sphere – this has impacted the international programmes.

This year’s CIB meeting took place in Stockholm, hosted by the three associations SALAR, ICLD and SKL International. Sweden’s remarkable attention for local government development globally was amongst others topic of a panel in which the Swedish International Development Agency explained the reason behind their good relation with the associations in international cooperation.

The full report of the meeting, including all the presentations, will be shared in the next weeks.