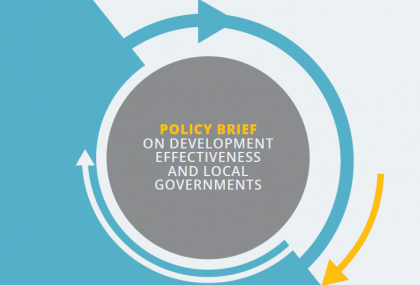 During the UCLG World Congress in Bogotá, a new CIB Policy Brief on Development Effectiveness and Local Governments was launched and presented to all UCLG members by UCLG Champion for Development Cooperation Nomveliso Nyukwana. The publication strongly calls for more institutionalized involvement of Local Government Associations in national development policies.

Current local involvement around the world: a study among 37 LGAs
In order to get a clearer view on the current local involvement in national development plans around the world, the CIB Working Group circulated a survey among local government associations (LGAs) at the end of 2015. The results of the survey and consequent in-depth interviews map the degrees to which 37 LGAs are involved in the definition, implementation and monitoring of national development strategies. Aside from this analysis, the policy brief includes case studies on LGA involvement in South Africa, Rwanda, Mali, The Philippines, Punjab Province (Pakistan), El Salvador and Norway.

Presentation in Bogotá
At the UCLG World Congress in Bogotá, the main conclusions and recommendations were shared in a thematic session on effective development. Furthermore, the publication was presented to the Executive Bureau that recommended to transform it into a UCLG position paper in 2017.