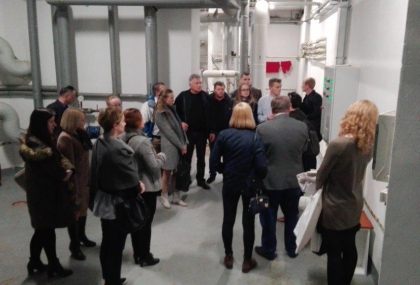 Contributing to a green planet does not necessarily imply adding red numbers to the city budget. Throughout the world, cities increasingly realize how much there is to win from energy sustainability and efficiency. Polish local governments have been a forerunner in municipal energy efficiency and green public-private-partnerships. In light of this the Association of Polish Cities (Związek Miast Polskich) will carrying out a program that aims to share these competences with Ukrainian municipalities.

In this project six Ukrainian cities are connected with Polish counterparts to exchange know-how on energy efficiency, investment and sustainability. The program, which is currently half-way its implementation, consists of a range of exchanges which will continue until the end of the year. The overall objective is increased competences of Ukrainian and Polish municipal staff in the subject of energy efficiency in the municipal economy.

In April, the cities of Bila Tserkva, Zytomir, Korosten, Ternopil and Vinnytsa sent a delegation of ten representatives to join their partner city in order to learn from its experience and initiatives in realizing energy efficiency. Polish cities have been working actively with Energy Performance Contracts, in which private partners invest in the modernization thermic energy systems in municipal buildings. The investment is re-payed by the municipality from savings in actual energy bills paid by the municipality. There is great potential to these investments, since energy savings may amount to 50%, as experiences from Poland and Norway demonstrate. In May, the Polish and Ukrainian partners visited Norwegian municipalities to study their experience in this thematic area, and in June a group of line employees from these Ukrainian cities visited their Polish partner cities for a one-week of ‘shadowing’, to learn about practical aspects of preparing energy efficiency infrastructural investments.

The second half of the 1-year program consists of a pilot project in Bila Tserkva, Ukraine, where a feasibility study looks for ways to make schools and kindergartens more energy efficient through thermo-modernization. The Association of Polish Cities aims to disseminate the lessons learnt in this pilot to other participating cities, so that they may benefit from them. The project is supported by the Norwegian Government, under the Norwegian Financial Mechanism, and the Polish Government.