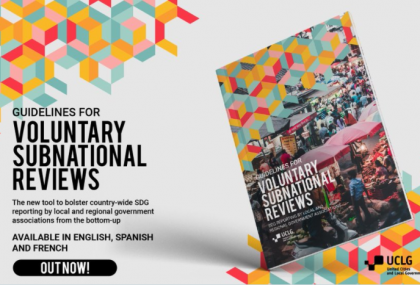 UCLG and its CIB Working Group are proud to present our new Guidelines for Subnational Reviews: SDG reporting by local and regional government associations. Read more on what VSRs are and how you start using the guidelines, as a Local Government Association!

Voluntary Subnational Reviews (VSRs) are  SDG reports developed by associations of local and/or regional governments. They are country-wide, bottom-up subnational reporting processes that provide both comprehensive and in-depth analyses of the corresponding national environments in which subnational governments localize the SDGs, showcase the subnational progress in achieving the Goals, and provide policy recommendations to help subnational governments achieve the SDGs sooner. Besides this, VSRs are a podium to share the experiences of LRGs from different parts of each country in implementing the SDGs on the ground.

Difference between VSRs, VNRs and VLRs?

VSRs are developed by more and more local and regional government associations, often in connection with their countries’ national SDG reporting cycle to the United Nations. These national reports are called “Voluntary National Reviews” and are presented at the UN’s High Level Political Forum by different countries every year. As VNRs usually have limited space for content on subnational government, VSRs are important complementary Reviews to the VNRs, providing more detailed information on subnational government country-wide and bridging the gap between VNRs and VLRs (Voluntary Local Reviews, developed by individual municipalities).

The elaboration of VSRs has been facilitated by UCLG since 2020: in six pilot countries who were reporting to the 2020 High Level Political Forum (Benin, Costa Rica, Ecuador, Kenya, Mozambique and Nepal), and in eight pilot countries who did the same in the 2021 HLPF (Cape Verde, Germany, Indonesia, Mexico, Norway, Sweden, Tunisia, Zimbabwe). Ecuador has produced its second VSR in 2021. Together, these VSRs represent more than 16.000 LRGs.

These reporting processes, along with the VLR processes, have had a positive impact in terms of multilevel dialogue, as well as on the dialogue between national associations and municipal governments. Results have been very positive in terms of enhancing local and regional participation in national reporting processes. For example, In Tunisia and Zimbabwe, local governments have been asked to summarise their contributions to integrate them within their country’s VNR. The VSRs of Benin, Costa Rica, Ecuador, Germany, Indonesia, Kenya, Mexico, Norway and Sweden have been mentioned, partially quoted or fully integrated in the respective VNRs. In Cape Verde, local governments were associated with the reporting unit and, in Nepal, the national associations were invited to form part of the national SDG Steering Committee.

Guidelines for other associations

Based on the experiences from the aforementioned pilot countries, CIB has developed, with contributions from the UCLG GOLD team, guidelines for developing Voluntary Subnational Reviews. This publication provides guidelines for those local and regional government associations that are willing to embark on the project of developing their own VSRs in a way that serves as input for their national VNRs, with the aim of helping to strengthen the localization of the SDGs. It provides the tools necessary to further enhance the potential of VSRs as instruments with which to increase LRG ownership of the 2030 Agenda and other global commitments and to strengthen multi-level and multi-stakeholder dialogue. The Guidelines are meant to be flexible so that each local and regional government association can adapt them to its own needs, objectives, resources and capabilities.

The drafting of these Guidelines is the culmination of a rich, participative and co-productive process, in which CIB played a large role. The Guidelines are based on experiences shared in a series of VSR workshops organised by UCLG and CIB throughout 2021. The four workshops, held in March, April, May and October 2021, brought together the associations preparing VSRs in 2020 and 2021 and set in motion a number of in-depth exchanges on matters such as structure, methodology, the selection of case studies and indicators, key findings, the dissemination and use of findings, and negotiations with national governments. The aim of the sessions was to exchange ideas in order to enrich the VSRs and to instill good practices into these VSR guidelines, highlighting the elements to replicate, in order to inspire other associations to produce VSRs in the coming years.

You will find the guidelines attached to this news item, in EN, FR and ES!

Inspired to formulate your own VSR?

It’s not necessary to wait until your country reports to the HLPF with a VNR. Various LRGAs already report through VSRs more frequently. Consult the guidelines to get started.

Background information on UCLG's and CIB's work on SDG reporting

UCLG and its CIB Working Group are committed to localizing the SDGs, the 2030 Agenda and the other major global agendas. With the start of the SDG acceleration decade, the GOLD team of UCLG is putting its efforts in supporting local and regional governments in the processes of monitoring and reporting on the implementation of the 2030 Agenda.

UCLG, on behalf of the Global Taskforce of Local and Regional Governments, has already facilitated and presented five reports called ‘Towards the localization of the SDGs’ at the United Nations' High-Level Political Forum on Sustainable Development that takes place yearly in New York. Other initiatives include developing and disseminating materials, participating in discussion groups and directly supporting local and regional authorities in their efforts to localize the SDGs and, particularly, to monitor and report on the achievements and challenges. Country-wide, bottom-up Voluntary Subnational Reviews and Voluntary Local Reviews are becoming crucial tools with which local and regional governments report on the state of SDG localization in their territories. Through the publication of the two volumes of the ‘Guidelines for VLRs’ along with UN-Habitat and now the ‘Guidelines for VSRs’ with the CIB Working Group; the facilitation of the communities of practice on local SDG reporting; and the publication of the ‘Comparative study on SDG monitoring systems at local and regional levels’ with several partners, the GOLD, consistent with the overarching strategy of UCLG, aspires to contribute to achieving the SDGs and empowering local and regional governments in their endeavor.

Please find more information on all the 'localizing the SDGs' work of UCLG's GOLD team on this interesting webpage: https://gold.uclg.org/report/localizing-sdgs-boost-monitoring-reporting