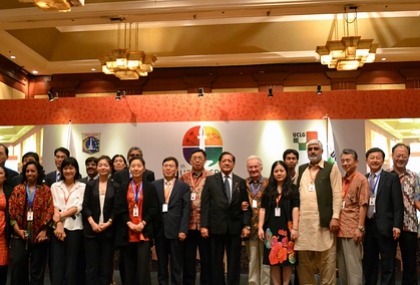 2016 kept the momentum going after the signing of several international agreements that emphasize the important role of local governments – the Sustainable Development Goals, Paris Agreement on Climate Change, Sendai Framework for Disaster Risk Reduction, and the New Urban Agenda. Committed to its mission to strengthen decentralized local governance in the region, UCLG ASPAC remained on track to support these agendas and its member local governments who bear the task to implement and contribute to achieving the targets set out in the agendas.

Over the year, the organization offered various capacity building workshops co-developed with training institutions in the region. It is a value added that UCLG ASPAC promotes toolkits and action plans, and links these trainings to follow-up action, in order to continue enriching the learnings gained and reap maximum benefits from participation. The first workshop on sustainable mobility, hosted by Seoul Human Resource Development Center (SHRDC), established a Local Government Transport Officers Forum in Indonesia where participants shared feedback on their action plans progress. With the UNITAR - Jeju International Training Center and UCLG World’s Culture Committee, UCLG ASPAC held workshops related to integrating culture in local planning for the first time this year. These were valuable contributions to increasing the organization’s advocacy for culture, which, thus far, has been well-received and deemed an important theme by members to build capacity on.

The fact that these capacity building activities are tied to follow-up actions and other divisions of UCLG ASPAC is a key endeavor. Projects on public space in Surabaya, for example, do not only help build knowledge but also provide practical skills to those that participate, including local government officers and volunteers from the community. Furthermore, UCLG ASPAC strongly expresses and offers support to cities and local governments for the implementation phase of their initiatives. This includes improving documentation, peer learning exchange and project development, in subject areas that include Disaster Risk Reduction Management, local economic development and knowledge management.