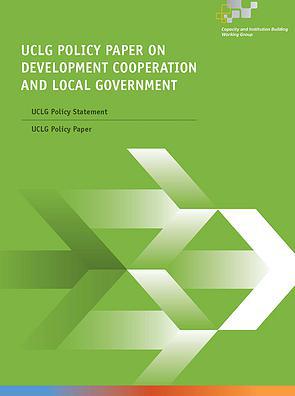 On 16 and 17 January, the UCLG Capacity and Institution Building (CIB) Working Group will provide a training to a group of elected local government officials from around the world. In the years ahead, these so-called Champions will advocate the key messages from the UCLG policy paper on Development Cooperation and Local Government at conferences and meetings of relevant organizations.

National governments, as well as global and regional organizations, will be approached to make sure the messages are dispersed on multiple levels. The eight elected local government officials that will carry out this task, were approached based on their excellent capacity to become ambassadors of the CIB Working Group agenda. Special attention was given to regional balance. The composition of the group of Champions was approved by the UCLG Development Cooperation and City Diplomacy Committee in October 2013. Diverse as they are, they all share a substantial expertise in local government development cooperation and are therefore given the title of ‘Champion’.

On the 16th and 17th of January, the Champions will visit the head office of VNG International in The Hague, the Netherlands, to take part in a two-day training course. This training aims to prepare the Champions for their task ahead as well as possible. The training will cover multiple aspects of advocating, including developing action plans, pitching and targeting organizations and national governments.

In addition to the training, the Champions will receive a toolkit containing several documents, such as fact sheets, best practice cases and template letters, that will support them in their efforts. In this way, the CIB Working Group wants to make sure that the importance of local governments in attaining the goals of the post-2015 agenda is recognized and that local governments subsequently are included in policy making and execution.