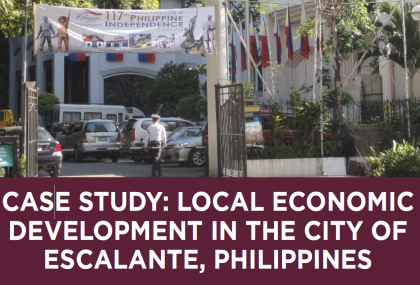 Too often project managers do not have the opportunity to track progress in partner countries once development cooperation programmes come to an end. Mr. Roger Maclsaac, a former technical team leader from the Town of Amherst, Canada, had the chance to revisit his former project partners in the City of Escalante, Philippines.

During his visit to the Philippines in autumn 2013, Maclsaac reviewed the outcomes of the former cooperation, which focused on Local Economic Development. The key objective of the project was to increase the capacity of the staff of Escalante to facilitate an enabling environment for economic development investment and entreprise development. One of the main activities was to develop a LED strategy and Action plan, which would set priorities and actions for the years to come. While the process of Strategic Planning was not new to Escalante, the inclusion or engagement of the community in all parts of the process was a new approach and it took some time for city officials to see its full value.

When visiting Escalante 10 years after the project ended, Maclsaac was pleased to see the positive changes that the city had undergone in the past years and that the LED strategy had in fact been followed and completed. “Many of the long-term actions that were identified in the LED strategy have indeed been accomplished, despite the fact that there have been problems of peace and security in the area” says Maclsaac.

To learn more about Maclsaac’s findings, please refer to the case study which has now become available on FCM’s website. This case study highlights some of the key outcomes and the persisting value of the planning process, thanks to the commitment from the outset to broad community and stakeholder participation in design and implementation.