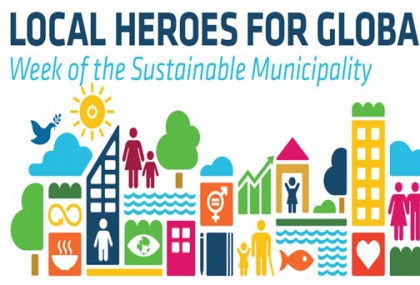 From the 18th until the 25th of September, the Association of Flemish Cities and Municipalities (VVSG) organised the third edition of its yearly ‘Week of the Sustainable Municipality’. Participating municipalities engage to raise the SDG flag at their city halls alongside the promotion of local ‘sustainable heroes’ such as citizens, schools, companies or organisations  who contribute to one or more SDG(s) and are therefore nominated to be the ‘local faces of the global goals’. All sustainable municipalities, alongside their heroes, are presented on the campaign website www.duurzamegemeente.be.

For three years in a row around 100 Flemish municipalities (one out of three) participate in the campaign, which has now become structurally embedded in VVSG’s SDG program. Where possible, the campaign format is linked to existing local processes and social reality. This year VVSG focused on ‘coronaheroes’ and digital campaigning while in 2019, the integration of the SDGs into the local multi-annual policy plans (2020-2025), for example by offering free trainings to local policy makers, was the central theme.

VVSG provides an extensive campaign manual, various campaigning materials (SDG pins, bingocards, posters, window stickers, flags, videos, …), a press strategy  and personal support to participating municipalities but the local governments and their heroes also invest a considerable amount of time and energy in the campaign. Local governments are encouraged to involve different departments and stakeholders in selecting the sustainable heroes, and to organize creative local activities that put the SDGs and the heroes in the spotlight. Take a look at this compilation video for examples of activities.

Even though the SDG flag is hoisted at city halls during the entire campaign week, VVSG asks participators to organise the official ‘hoisting of the flag’ moment on September 25th to ensure maximum press visibility. This year, not only all participating Flemish municipalities but also various NGOs, provincial, regional and national government departments in Belgium as well as dozens of Dutch municipalities hoisted the flag on September 25th and made a joint and loud call for sustainable development. VVSG and VNG (the association of Dutch municipalities) hope this SDG flag day will become an annual and worldwide tradition.