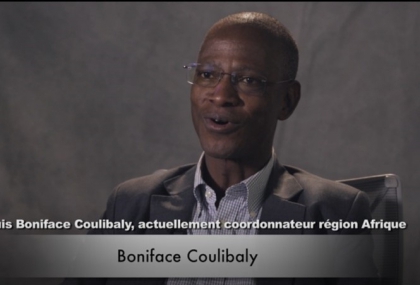 What kind of impact do our local government development cooperation projects have in the long run? Boniface Coulibaly, the former Secretary General of the Association des Municipalités du Burkina Faso (AMBF) answered this question in an interview done by the Federation of Canadian Municipalities (FCM), now widely available to all CIB members.

Interview about results of a decade-long demonstration project

Even though the case for decentralized cooperation has been made, we rarely have the chance to observe the fruits resulting from the seeds we carefully select, plant and nurture with our partners. In 2017, FCM had the opportunity to interview Mr. Coulibaly about the results of a decade-long demonstration project to help local councils make better decisions and be more transparent with their population.

The 4-minute video “From local to national: The example of the municipal clerk’s office in Burkina Faso” tells the story of a keystone initiative spearheaded by the Association des Municipalités de Burkina Faso (AMBF) that has allowed the association to deliver value to its members and to demonstrate its relevance to the national government. He underlines that effective decentralization requires grassroots leadership and ownership. As well as trust and patience, even in the most favorable conditions. The video is available in English, French  and Spanish.

The video is now used by FCM to help local government partners around the world who are new to decentralized cooperation to understand how change happens. Have a look and tell us what you think! FCM would love to know about similar videos who may have produced with your partners.

Please note that this webinar is entirely dedicated to women leadership activities in international projects and pr… https://t.co/xsyOqgkFBD
2020-03-27 15:39
CIB is organizing a Webinar on Women Leadership on 2 April! Three experts from Ukraine, Uganda and Sweden will shar… https://t.co/jMbklpxr2G
2020-03-27 11:38